Darcie is a very happy 6 year old. She has many diagnoses, a few of them being- autism, a super rare chromosome duplication, hypotonia & hypermobility. She’s such a happy little girl with an amazing laugh! Day to day life with Darcie is hilarious, she doesn’t talk but she doesn’t need to, she’s just genuinely so funny! Don’t get me wrong it’s not all rainbows & unicorns all the time but the good always outweighs the bad. 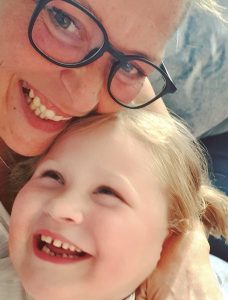 I think the most challenging thing about having a special needs child is not actually the child, it’s everyone else’s perceptions of them or your family unit.

Getting the right help for your child isn’t always as straight forward as what everyone seems to think. It’s a constant battle to either get them the equipment they need, or the fight to get them into the right school. I think people presume we get all this stuff thrown at us but that’s really not the case in most instances unfortunately! 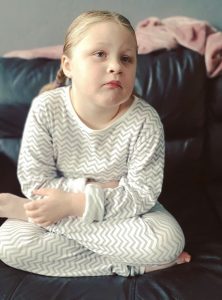 We live in such a lovely village, everyone knows everyone so Darcie’s never been treated any differently & I wouldn’t want people to treat her differently. We had one incident with a teenage boy who mocked Darcie & thankfully that’s been the only time we’ve ever had to face any kind of behaviour. What I would say to people that are curious is rather than stare, ask a question,  just don’t be rude in the process & to educate your children that everyone is different & that’s absolutely fine! 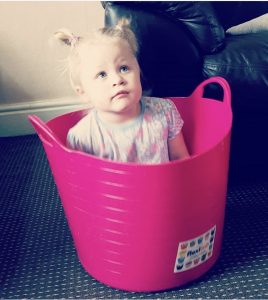 Because Darcie doesn’t talk she communicates in other ways such as pointing at what she wants, taking me to what she wants but sometimes it’s a bit of a guessing game. Honestly the only time it really bothers me that she doesn’t speak is when she’s poorly, purely because she can’t tell me what’s wrong. Other than that she communicates pretty well now.

Darcie just loves life! She’s such a happy, giggly girl. Her personality is just loud, she loves Peppa pig (mum not so much) sensory play, trampolining & generally making as much mess as possible! She’s recently took a real interest in Barbie’s for the first ever time so I’m currently living my childhood through her haha.

Darcie hasn’t used equine therapy before but she starts a new special needs school in September & I’m pretty sure they do it there! I can’t wait for her to try all these new things!

As told by Claire, Darcies wonderful mum, if you wish to keep up with Darcies life, please click the link below