I was at a show in 2018 exhibiting and was approached by parents with their beautiful daughter.  This little girl had disabilities that meant she was unable to sit up unaided but she clearly loved to ride. 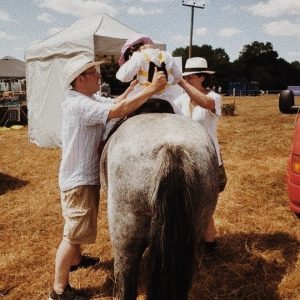 It was very clear that the Equihandee Harness just wasn’t going to offer her the support she needed whilst in the saddle.  When we sat her in the saddle her little face lit up like a sunbeam, she was smiling from ear to ear, for her, just sitting on a pony was wonderful, she felt happy and elated, on top of the world, this simple activity for her was the best thing ever.  She was having the time of her life.

I got to work on creating a product that offered support to the child’s core but was comfortable enough for them to wear with strategically placed handles for the instructor/helper to hold so the child can be stabilised and balanced whilst in the saddle. 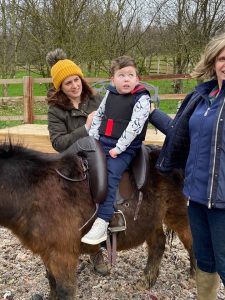 I spoke with my already fabulous manufacturer and they were happy to help but I also had to source another supplier for the material to support the core.  I had issues with this initially as a manufacturer who had assured me they could help totally let me down and this was the reason behind the long delay of launching, but I eventually found another supplier and they have been a dream to work with, nothing was too much trouble for them.

After months of toing and froing I finally had a prototype of my ground breaking product. My last hurdle was I needed to trial the design.  I plugged my prototype on social media letting the world know I was taking my prototype to Your Horse Live.  The response from the public was amazing.  I was approached by loads of people taking an interest one of them was a lovely lady called Hayley she told me she had seen my posts and was very interested in my product as her son Harry was quadriplegic cerebral palsy and he loved riding.  As we chatted I found out Hayley lived about 20 miles from me so I asked her if she was interested in assisting me with trialling my product, thankfully Hayley agreed.

One sunny but very cold day we visited Hayley and her lovely family to see if the Core Support would help Harry.  We sat Harry on his gorgeous pony and popped the core support on him.  Hayley was amazed at how much easier it was holding harry in the saddle.  Hayley explained that due to Harry’s condition he just folds in the middle and holding him now, as he gets older, was impossible 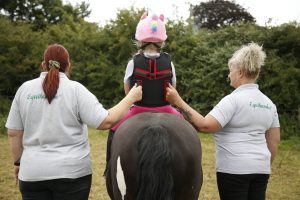 We want to make the joys of riding accessible to everyone no matter what their physical ability, and we know this product does just that.