As a parent you spend most of your life worrying about the happiness and safety of your children.  I know I do.  My daughter’s health and safety is always on my mind, so how does it make you feel when your child says ‘I want to ride a pony’?

For me it was always a dream for Matilda to ride but on the flip side her safety was very important.  If im honest I always wanted her to ride but kept sweeping it under the carpet as I worried she would love it like I do and want to take it that one step further. 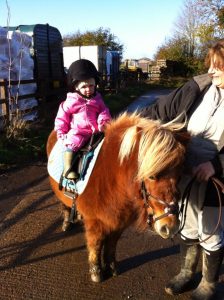 I may have been smiling for the camera as she sat on a pony for the first time, but inside I felt sick to the stomach and a terrible overwhelming feeling of dread that I might be sowing the seed for her doing something that can be very dangerous and put her safety at risk.

I remember the first time she rode when she could sit up, I popped her in a padded jump suit, one size too big, so I at least had something to hold onto, if she should become unbalanced. It was a total nightmare, my top half of my body was facing Matilda and my legs were pointing forward, very uncomfortable and very unsafe for Matilda.

As Matilda grew so did her confidence in the saddle, she loved it, it brought a huge smile to her face bobbing up and down, I loved to see her enjoy herself so much but I was always sick with worry the pony might just spook or trip and her smile would be gone forever and her confidence in tatters.

I remember the first time Matilda became unbalanced and almost fell off, her cushion would have been a concrete floor, I remember the sheer panic I felt as I lost my grip on her clothing, it was all in slow motion, the terrified look on her face as I desperately tried to save her and stop her falling but there was nothing easy to get a hold of, I pinched, clutched and grasped before managing to grab her arm. Heart pounding in my chest and my heart almost in my mouth!  There is nothing worse than watching your child fall off and hurt themselves. 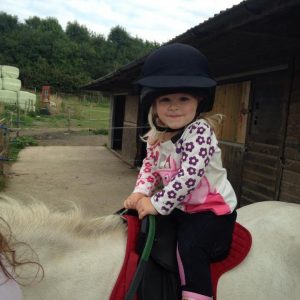 I had managed to pull her back on board but despite my best efforts in saving my daughter, it still ended in tears, her confidence was at an all-time low, her trust in me damaged and to top it all I had hurt her arm trying to save her

Matilda was also traumatised from my own fear and panic, my saving the day was not a success, I so wish I had an Equihandee during these times.  I now had a child that was frightened of riding and it took me ages to convince her to get back in the saddle, if only I had created Equihandee earlier, it would have prevented these awful feelings of worry and dread and the upset and fright it caused Matilda.