Whilst working on my third product I was approached by a lovely lady called Hayley.  Hayley had seen my new product and was very interested as she had a severely disabled son called Harry, who she thought would benefit from it.  I asked Hayley to give an insight of her life living with a child with a severe disability.

My name is Hayley I live in Daventry and I have three children one aged 1, 5 and 7. My five year old Harry has quadriplegic cerebral palsy, this is because he suffered two strokes prior to being born leaving him with severe brain damage. As a result Harry has no functional use of his limbs, is registered blind, is mentally delayed at around the age of a two month old, is tube fed, non-verbal and registered blind. He also has breathing problems. 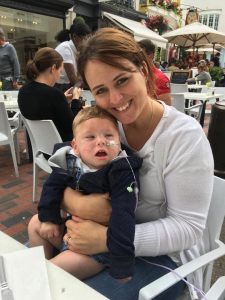 Life on a day to day basis for Harry is hard, he suffers with severe reflux and constipation which causes him lots of bowel trouble. He has painful muscle spasms and he gets very tight muscles. He is completely reliant on us for everything and he cannot communicate to us what is wrong, which is very hard for us as parents so we have to do a lot of guess work. Day to day for Harry involves, physio, tube feeds via a button in his tummy, suctioning, hoisting, changing and time in his standing frames. In between all of that Harry enjoys music, cuddles, songs and stories. Harry also really enjoys hydrotherapy and horse riding. 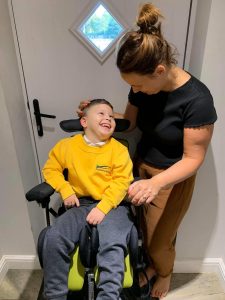 Hippotherapy is great for Harry’s hips as he suffers with hip migration which is a common problem for children who aren’t weight bearing. It is also very good for his spine, alignment and forces him to work a bit harder on his head control. But above all of these reasons is the calming impact that riding has – even on a Harry who has very little understanding of the world around him. Harry loves the movement of being on a horse and regularly giggles as he makes his way around the school. It’s one of the only times when I just see Harry the little boy, just having fun like his siblings. And it means such a lot to me and him.

Sadly though we were struggling to keep Harry safely on horseback as he’s very tall and heavy. And his lack of core strength and balance meant that we were having to hold him up so that he didn’t just fold in the middle plus counterbalance his weight with every movement. He can’t simply hold on for himself like we could.

When I found out about Equihandee and their new product they were piloting I was really keen for Harry to give it a try. It came at just the right time and I thought it sounded revolutionary. 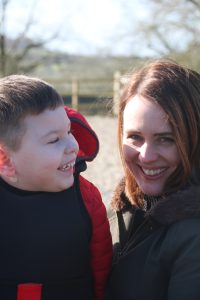 And wow what a difference it makes. The vest offers him the support he needs to sit straighter with handy handles for me to keep hold of Harry for us. I also feel that Harry is very safe in the vest as the quality of the product is great and very secure.

I am so thankful to Lucy for coming up with such a life enhancing piece of equipment that will help so many children like my Harry to have an experience which so many children take for granted.

Hayley has set up the helping Harry trust to help support Harry and families like theirs. To find out more please go to www.facebook.com/thehelpingharrytrust and give them a like.

We would like to thank Hayley for taking time speaking with us about her life with Harry, please do pop over to Hayley’s Facebook page