What is it about a cob that makes them stand out from others? Why do we love a good old honest Cob? Is it because they are like sitting on a big fat comfy armchair?  Is it the laid back personality, or is it the moustache or beards they grow in the winter? What is it about a cob we love so much?

There are so many different “Cobs” you have Show Cobs, Coloured Cobs, Traditional Cobs, Norman Cobs, Welsh Cobs and Working Cobs, the list is endless

The rulebook of the British Show Horse Association (BHSA), states: “The Cob is a type rather than a breed. A short-legged animal exceeding 148 centimetres (14.2 1⁄2 hands; 58 1⁄2 in) with a maximum height of 155 centimetres (15.1 hands; 61 in), it has bone and substance with quality and is capable of carrying a substantial weight.  Cobs should have sensible heads, (sometimes roman nosed), a full generous eye, shapely neck crested on the top, with a hogged mane and well defined wither. The Cob should also have clean, strong hocks and all the attributes of a good hunter.

More often than not they are good doers, none of this spending a fortune on bags of food as they tend to live off fresh air.  Cobs tend to have gently personalities and are as honest as the day is long.  They are kind, placid, and genuine and will love you unconditionally.  Cobs are often used for disabled riders due to their kind laid back nature, and also make great driving horses.

It is said that a good show cob should have “the head of a lady and the backside of a cook.” This is so very true, you cannot beat a big fat cobs bottom!!!

My Cob was a gentleman, I could ride, drive, show and jump him.  He could turn his hoof to anything, he would Jump 4ft spreads without even thinking about it, I could lend him to friends for a beginner to ride or I could show him and win hands down cos he could move spectacularly. I was once asked to take a bride to the church for her wedding day in my Trap with my Cob, what a great day, my boy had pale blue and gold roses plaited into his mane. 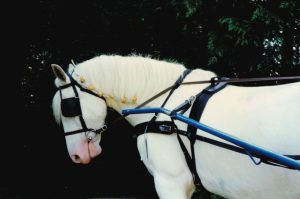 My cob was a nightmare for keeping weight off, but this was probably because he used to jump out of his field and help himself to the hay in the barn!! I always had that mental conversation you have with horses that you have “that bond” with, I knew what he was thinking before he did.  Many times I would be riding somewhere and think to myself that I would have a canter round the next corner and before you know it we were cantering.  My boy had a lovely “rocking horse “canter, he was so comfortable.  I always felt safe around him and never doubted him ever. 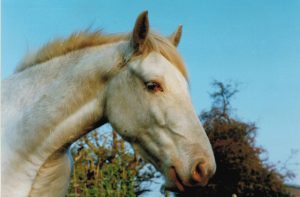 I very sadly lost him to Colic, he had never been ill in all the 21 years I had owned him, he was found by someone else thrashing around in the field, I called the vet as I raced to be with him,  the vet said it wasn’t looking good, he seemed calm when I arrived but the vet had said it was down to him being stoic , another great attribute of this breed, the vet  gave him medication in the hope it would help, unfortunately it didn’t, and I very sadly had him put to sleep.  I felt a massive loss as he had always been there with me for all that time, my other horse was also distraught, and the loss of him affected her badly for many months after.  He was one in a million and very sadly missed.