Visiting the amazing Harry and his family

I had a stand at Your Horse Live when I was approached by a lovely lady called Hayley.  Hayley had seen my social media posts about my new product, the core support, and Hayley was interested in it for her son.

Hayley told me Harry was quadriplegic cerebral palsy, he loved his riding, but Hayley was struggling to hold Harry safely whilst he was in the saddle.  Due to Harry’s disability he is unable to sit up unaided.

Hayley lives about 20 miles from me so I offered to visit Hayley’s home and see if our new product would help her and Harry. 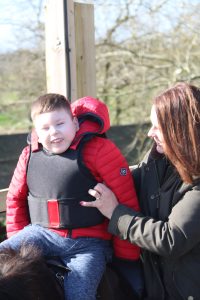 We arrived at Hayley’s and it was bright sunshine but a bit chilly.  We sat Harry on his pony but Harry became upset as his muscles were tight due to his disability, we fitted the core support on him and it fitted a treat (Harry was 4 years old).

Hayley’s face lit up as the core support had answered all her prayers; she was finally able to hold Harry in the saddle with little effort.  Harry would normally fold in the middle as he has no core strength.  Hayley said it was getting hard for Harry to ride as he got older, as he is so tall and heavy. 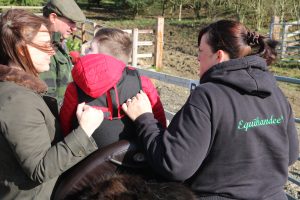 The core support gave Harry complete support to his torso, Harry was now able to sit up unaided in the saddle, this also meant he was easily stabilised by Hayley as she held onto the strategically placed handles as she walked beside him.  Hayley also said she felt Harry was much safer in the saddle with the core support on.  The benefits of riding for Harry are very important for his physical and psychological therapy

When Harry was first in the saddle he became upset, this was due to him having hip migration, tight muscle’s and painful muscles spasms, but the movement of the horse loosens his muscles, this is just one of the reasons Harry needs to continue his riding, but without the core support Harry wouldn’t have been able to continue.

Apart from all the physical benefits riding has for Harry, best of all it makes him smile and laugh, something he did lots of whilst he rode, this is why we do what we do.

We want to make the joy of riding accessible to children, no matter what their physical ability